After the Kyoto agreement in Japan 1997 and entered into force 2005, it became a free for all for countries to mitigate their polluting ways. It also was a green light for Non-government agencies to run amuck developing the laws and policies for legal methods to take land. This included coercion, regulating even forcing fines on land owners that might be interested in selling their land for the purpose of conservation. Each time a policy or law was questioned, within weeks the policy would be changed, in order to support the green cause for the purpose of buying (taking) land. During this time countries around the world worked with the US to mitigate land for wetlands. Putting conserved land into a wetlands bank in order to mitigate polluting companies in say China, Japan and other countries. This was to meet the Kyoto Protocol.
The Non-government organizations include but not limited to The Nature Conservancy, Trout Unlimited, Ducks Unlimited, American Rivers, Sierra Club, The Audubon, National Wildlife Fund, Friends of the Earth, etcetera, etcetera, etcetera. This list is endless. The money involved is enormous.

Every one of these groups that work to conserve habitat use unimaginable amounts of money. They all receive money from donors. Donors that actually believe that you and I cannot and do not know how to take care of the land.  NON-profits also receive money from the Federal Government in the form of GRANTS. Lets say they want to buy a piece of property for conservation, they receive a grant for $200,000.00 for the acquisition of a piece of property. They have four years to buy the property after being awarded the grant. During the four years they have all administrative costs are theirs up to  and equal the amount of the grant (federal government money). Air quality, water quality, endangered species, EPA, BLM,  Army Corps. of Engineers, Fish and Wildlife, Environmental & Natural Resources, and many others that ACT like minor players. The money flows unabated. 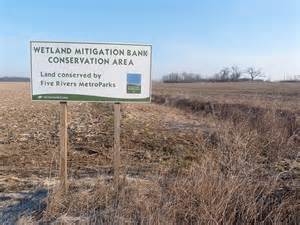 The need to conserve land (habitat) to reduce green house gas emissions for the purpose of saving the planet. Since the US is a developed country is a primary country to reduce these emissions. In order to do this land must be conserved to lessen human destruction of natural habitat of flora and fauna. These groups and organizations fully believe that man(human) is the destructor of the planet and must be removed from the land in order to leave the land pristine. For this purpose Wetland Banks were set up in the US in order to  offset CO2 emissions in other countries.

Japan, China, India, South Korea, and many other smaller countries were allowed to purchase wetlands credits in the US. The money went into land purchased that were put into the banks. This was called Carbon Credits. The pollution continues in these countries but the land continues to be taken in the US.

In the case of Oregon it is just plain land taking for profit with the offset of carbon credits for the purchasing country. This allows them (other country) to be in compliance with the Agenda 21 (2030).

2 thoughts on “Wetlands Banking and Mitigation…”