Agenda 21 Agenda 2030 is now working on all of us. They don’t want it stopped they want a dystopian society that has everything you and I do controlled by the government (of the world). They have gotten the libs right where they want them. They complain and fight to get rid of history (monuments and memorials) 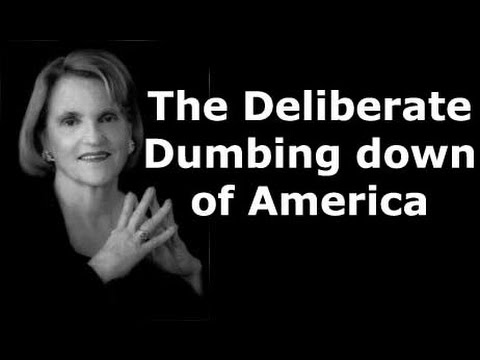 The school system has successfully dumbed down a whole generation of kids that “can’t pour piss out of a boot”. The agenda knew that if they dumbed down a whole generation that the U.S. culture could be destroyed. Every child (excepting a few) that has been thru the public school system in the last 20 years has been brainwashed into believing our planet is being destroyed, that we are the reason and that animals and plants should have more rights than humans. Everyone should be the same and think the same way. Everyone should be entitled to food, clothing, a phone, a computer, a gaming system, a car and a roof over their head with out ever doing anything for it. The government should provide it all for them. This is what other countries do for them, they think. The schools have trained these kids in the correct ways of social interaction, they have never had to learn correct communication and correct conflict resolution. They think they know it all, because the schools never told them they didn’t. If they feel they were an A student they were. The parents of these kids didn’t help this situation at all, these parents let them do anything they wanted and supported their bad behavior in school and in public. These parents also let the school raise these kids. (It takes a village) Completely turned the education and raising of their kids to everyone else. These parents were bought into the need to give everything to their kids and ignore the need to teach them social skills politics relationship skills and last of all life skills like mailing a letter so they can vote.

These lawn mower/helicopter parents did not want little johnny to have a bad moment in their life so they paved a nice clean path for them all the way thru school and now they are out in the world without a “pot to piss in”.

If something like a monument makes them feel uncomfortable (because they do not really understand the history behind it) it should not exist and everything would be right in the world.

A person can’t completely blame these kids cause the parents did it to them. In my eyes it is real child abuse to not teach your own child to read better, think better have common sense, handle money, learn manners, teach security, and teach them basic life skills to get ahead in the world.

The agenda has achieved a goal and many adults have allowed it to happen. The adults have believed the mantra that we should have a sustainable city, sustainable food, sustainable planet. Sheep is what they have been. Follow along and don’t make waves, ignore life until sometime later, well that later never comes. You cannot raise your kids when they are adults.

Politics has gotten so corrupt and soap opera-ish that these adults got numb to it. So the agenda could moved forward without knowledge without controversy without objection and without outcry from the people.